So the events all took place on Statia (Saint Eustatia) just not related to each-other😊.

We arrived on Saturday morning after leaving Saaba at dawn, just to have a lot of time before the custom close or charge us overtime. Andreas went in to customs like many times before and took Anders with him, me and Chris took a bench and had some free harbor WiFi. When Andreas and Anders came back, Andreas told us that the Customs officer had smiled and laughed at our boat name. He had been to afraid to ask if they Knew what Chibidarra stands for.

So for those who do not know the name CHIBIDARRA Comes from a old Swedish song by Povel Ramel called “Måste vägen till Curacao gynga så?” , and the name Chibidarra is mentioned in the text and according to him it suppose to mean something close to “Hell of a boat” in Curacao language but we have not found out if this is true.

So by the officers reaction we hope its true still, but it will probably still be a mystery until we get to the ABC island or even Curacao itself. The mystery remains.

We walked around in town after checking in. Statia has a lot of old ruins close and in the water and a old fort in the middle of the town. When we entered the area we noticed a huge mango tree in the middle of a “square” and no people around, so to not give the goats every mango we stocked the boat with some. We had not updated the blog in a while and decided therefore to stop at a WiFi bar. We ended up in a bar called Hawaii-bar that sold beers for $ 2 and had really good internet, so everyone was happy. With good internet and cheep beers we stayed until late, just to get back and have dinner at the boat. 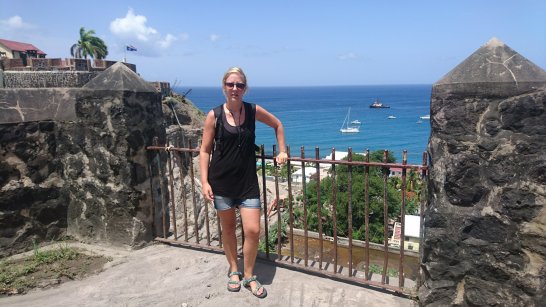 When we got back we got invited to another boat for some beers, it was three British guys that had just graduated school and where to start working when they got back . We took them to a local place we noticed from the bar we spent WiFi:ing on. They all were pretty tired from previous night sailing so at eleven they decided to get back on their charter boat. We Asked some locals outside the bar on where to go, and they said there is a party at the volleyball field. We started to make our way there and on the Way walked by a bar with a pool table and decided to play some pool before continuing to the volleyball fields. After playing a couple of games we walked on, the party we were recommend to go too where a private birthday party for 50 years lady named Jacinth. After a little while Chris located the Guest of honor and we were welcome to stay and take anything we wanted from the open bar. There where a lot of people at least 50 with a live music. We ended up meeting some really nice locals, we gave two guys our number to meet up on Monday. The party ended around four and we were the last ones to leave. 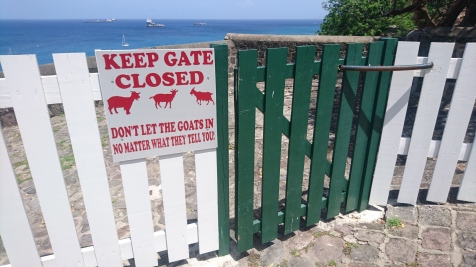 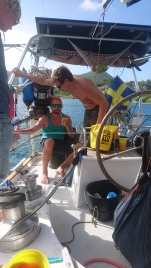 The next morning I woke up to sirens, it was the coastguards wanting to board our boat. Chris had been awake and tried his best to do a quick tidy up. When they came on board yesterday’s food and glasses were still on the table and the boat were a huge mess. The officers were really polite and professional and after checking our papers and life west’s they thanked and went away. The rest of the day was pretty slow did some snorkeling and watched some Netflix.

On Monday we planed to go hiking but didn’t really make it up early and to little plans were made. So we went to the famous Gin house to have a Gin and tonic but the bar was closed. So we went up the hill to town, where we had seen a sign about drinks but it was a coffee shop and it was closed. So we walked down the street to a place called the cool corner were there was WiFi. When we got there it turned out to be a sport bar and that Sweden were playing Spain men European Championship in soccer within 15 min so we thought it was faith and stayed and watched. Sweden sadly lost. We went back and had our fancy Gin and tonic as a consolation before getting back to the boat to eat and later on meeting up with the locals at the cool corner that same night.

Over and out // Hanna