So once again we stop in Bequia. With a lot of wind we flew from our former spot on St Vincent and arrived early on the island. we chose to anchor close to the plantation resort hotel to get some free WiFi on the boat, pretty much like the last time but a little closer. The locals owning some mooring came by and where really rude, we didn’t understand it at first but we had anchor in the Mooring field and there were alot of space outside of it and in other places in the bay. Opps. we didnt block any mooring, so we stayed the 3 days in the spot. The last time we where in bequia there were so many boats that it was not clear to us where to Moorn or Anchor. This time the amount of boats on moorings where less then ten.

Getting back to a place you’ve been and experienced its always weird. When Traveling I avoid doing it because usually you have Certain hopes and expectations or even feelings connected to a place and it mostly depend on all awsome people you meet the first time. I’m glad that Anders parents were onboard and we had new experience planed.

We spent the first sundowner at the floating bar

Then we continued on later that night to Max pizzas

So my birthday onboard Chibidarra started with fresh made bread that Anders ,Mon and dad (Aase and Jan) made and a Mimosa that Andreas mixed for me

After breakfast we whent snorkeling around the devils table, it was nicer than I remembered it. When we got back we spend some down time relaxing on the boat before early dinner / lunch with cake. 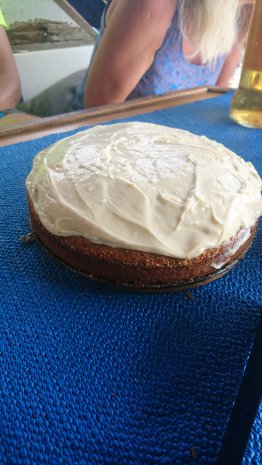 After stuffing ourself we what for a walk down to lower bay and up some hills to get a nice view .

they didn’t let me win, bastards 😄

The next day, Aase and Jan needed some wifi to book their return ticket to Martinique so Me and Andreas took a hike to Peggy’s rock and to Moonhole. The hike up to Mt Peggy was a little tricky there was nothing showing on google maps or on our Osm-offline maps but with some photos from the quick book of the trail and later help from some locals we found the way up.

Me and Andreas walked for most of the day covering the south west of the island. When we got back we were pretty tiered so we played some more cards and went to bed pretty early because we wanted a early start for Tobago Cays the day after.