We arrived in in BVI on the island of Virgin Gorda in the morning: We decided to stop in the northern part of the island where there were supposed to be a customs office in the Virgin sound. But this was apparently not true anymore since the big hurricanes in 2017. A lot of the islands were damaged and we realized this more and more in the coming days. So we had to get back out to sea and headed south on the same island about 10 nm to Spanish Town which had a open customs office. So we could check in there after a lot of papers and one extra visit to the boat to get flight information for the crew leaving us in the BVI´s.

So we stayed at Spanish town for the night and the next day we took a walk to The Baths which is a nature reserve area with some cool caves and nice beaches next to the very rocky sides. So we walk the touristy paths and had a beer at the beach bar. It was nice but a bit to many charter boat tourists around. We continued walking around the island to an old coppermine that were supposed to be cool. It was nice but not more than some walls standing from an old house. But it gave us some very well needed shade to eat some lunch and cookies. 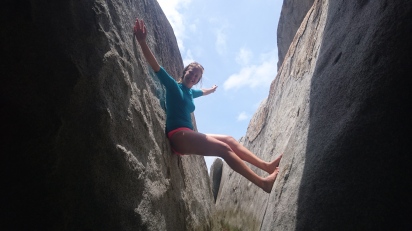 The next day we moved back north to Virgin Sound and found a really nice bay with really nice water and a nice long beach. We were almost alone with only 2 other boats around. The next day were a day with a few failed attempts. I drove Hanna, Ben and martin to shore to have a nice hike and find a bar for some wifi. I went back to the boat trying to do some kiting with Anders and was gonna get them 3 hours later. But as soon as they got of the dock a very angry local came running and said they could not go ashore. All of the old marina and bars where destroyed in the hurricanes and they were repairing and rebuilding so no one were allowed ashore in the meantime. Not even for hiking in the bushes. So they tried to call me and wave for me to come back but I could not hear them. So they settled in for a 3 hour wait on the dock. But after about 45 minutes a dive boat came and laughed heartedly and then felt a bit sorry for them and gave them a ride back to the boat. In the meantime Anders and my Kiting failed on to little wind so we decided to use the kiteboard as a wakeboard instead after the dinghy so we still had some fun.

After a couple of days we left the beautiful bay for Anegada the northern most point of BVI. Anegada is a sand island which is really flat and a lot of nice beaches. When we arrived close to the anchorage the water looked Green. So after anchoring we took a swim and there was a lot of sea grass on the bottom giving the water a greenish look. We tried some snorkeling on the reef and also tried to catch some lobsters. We did see a few but failed catching them. So we went back to the boat and then in to the beach and tried the beach bar. The next day we tried again on the lobsters and we caught 2 wich gave us some really nice grilled lobsters for starter. The next day we went to Tortola, the main island for a full moon party. 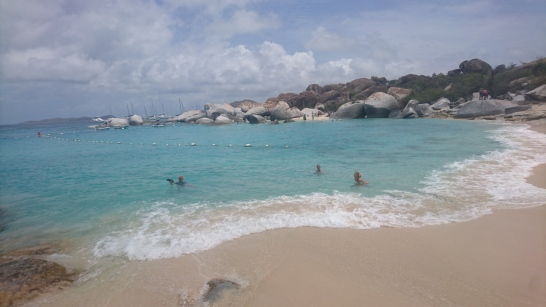 View all posts by ante888